Ben and Jack's Steak House in New York City owned by brothers and cousins, Ben, Jack, Russ, and Harry Sinanaj is a classic steakhouse, where the signature dish is a 44-ounce Dry Aged Porterhouse Steak; however, they also offer a wide selection of seafood, poultry, and pasta dishes on the menu to appeal to diverse palates. Executive Chef Admir Alibasic is the talent in the kitchen.

2009, the 10,000 square foot restaurant comfortably can seat up to 400 diners on two levels of attractive space, there are five private dining rooms for more intimate gatherings, special occasions, or corporate outings, and two full bars. During warmer months, the restaurant also has sidewalk tables fronting Fifth Avenue for those that would prefer to dine al fresco and watch the excitement of the City. 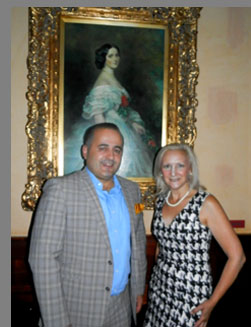 Speaking with one of the owners, Jack Sinanaj before having dinner, we learned the interesting history of the restaurant and the family's passion to create a memorable dining experience for their clientele where excellent service is a key to their success.

Growing up on a small farm in Albania, young Jack dreamed of being an Engineer or a Detective; becoming a restaurateur never entered his mind. When he immigrated to the United States his first job was working in a restaurant and over time he became interested in what was happening in the kitchen. Jack, along with his brothers and cousins, worked at top restaurants in New York including working at Peter Luger, which he described as getting a "Master's Degree" in steakhouse. 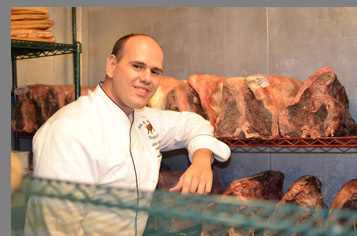 The menu features steaks and chops befitting a steak house as well as poultry, pasta, and seafood dishes. Their steaks are U.S.D.A. Prime, Dry-Aged in their own aging box, and their signature steak is a 44-ounce Porterhouse steak which is a big-Daddy of a steak made for sharing or for larger appetites.

In addition to Porterhouse steaks for two, three, or four persons, they also offer Filet Mignon, Prime New York Sirloin Steak, Rib Eye Steak, Veal Chops, and Lamb Chops. So how do you decide which is the best steak for you? Although you can ask the knowledgeable waiters, we decided to include a guide to steak to assist you in your decision however you should also factor in how you like your meat cooked whether your preference is rare, medium rare, medium, medium well, or well done, as certain cuts are better suited for less or more cooking.

Your Guide to the Tasty World of Steak: Porterhouse steak is a large steak that has a T-shaped bone with both top loin and tenderloin. Filet Mignon is the tenderest of steak cuts, and is buttery, and is best cooked rare to medium rare for the best flavor. Prime New York Sirloin Steak is large, lean, well-flavored, and moderately tender. Rib Eye Steak, also called Delmonico Steak, is a rib steak minus the bone, or with a small bone towards the back of the steak, and is beefy, juicy, with generous marbling throughout and is one of the most tender and tasty of beef cuts.

We began our dining experience at the restaurant in late August 2015 with one of the specialty cocktails, a Fifth Avenue Martini, which arrived frosty and well-crafted to enjoy with our appetizer, the chilled Seafood Platter which was a whole lobster split lengthwise, with cracked lobster claws, lump crab meat, and jumbo shrimp presented on a bed of crushed ice with lemons and cocktail sauce, accompanied by Tabasco Sauce and a bowl of horseradish and individually wrapped crackers. This was the perfect "surf" beginning, with chilled and delectable fresh seafood. 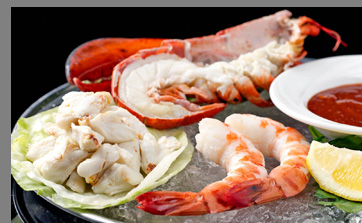 For our salad course, we had the Fresh Mozzarella and Beefsteak Tomatoes Salad, garnished with chopped basil. We should note that the restaurants portions are very generous, and our waiter Jare wisely advised us not to sample too many rolls from the plentiful bread basket so that we could enjoy the rest of our meal. 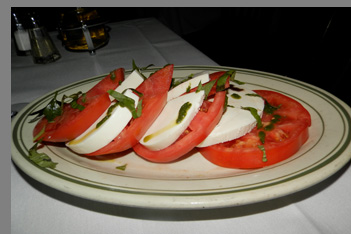 For our entrees, we diverged in our selections with (Edward) ordering the Rib Eye Steak, and (Debra), the Scrimp Scampi presented over rice. The Rib Eye Steak, which was enormous, was perfectly cooked to order, medium rare, tender and flavorful, and the Shrimp Scampi was bountiful with butterflied shrimp on a bed of steamed rice. For our side dishes, we ordered the Creamed Spinach and the Cottage Fries to share, accompanied by glasses of Cabernet served in a monogrammed B&J wine glasses. 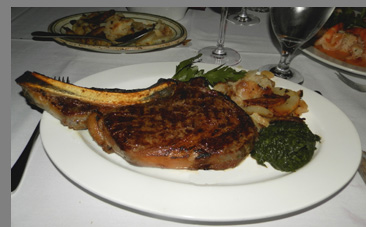 For diners looking for healthy choices, we would like to note that the Creamed Spinach was not the traditional steak house fare that is heavy, very rich and laden with cream, but rather the term creamed referred to its creamy texture, as it was made without any cream. 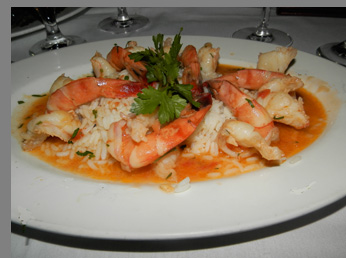 We ended our evening on a deliciously sweet note by sharing a generous portion of Key Lime Pie for dessert that was drizzled with dark chocolate and accompanied by a large bowl of freshly made sweetened "schlag" (whipped cream). 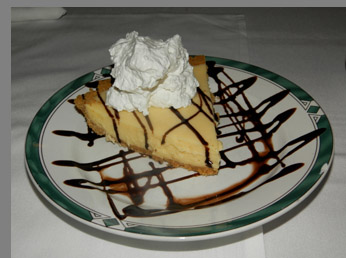 Read the interview with Executive Chef Admir Alibasic who graciously shares a few of his tantalizing recipes for a cocktail, Basil Buddha Hand Lemon Drop, and two appetizers, Sesame Crusted Tuna with Wasabi Cream, and Fried Oysters with Steak Sauce Slaw in the Chefs' Recipes section.

This module is pure Boostrap code.

This is a module above the mobile navigation

This is a module below the mobile navigation